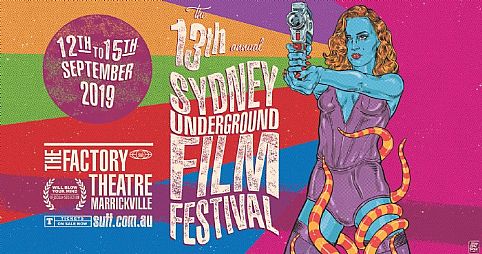 When:
Every day until Sun 15 Sep 2019
Cost:
16
Details:
Sydney’s leading festival for cult and underground film, the Sydney Underground Film Festival (SUFF), will descend on the Factory Theatre from 12th to 15th September to showcase the very best in freaky, absurd, fantastic and not-for-the-faint-hearted films.

Other Festival highlights include:
- ‘Alice’ – The Sydney premiere of the SXSW Grand Jury prize-winning film from Australian filmmaker Josephine Mackkeras.
- ‘The Art of Self-Defense’ – The Sydney premiere of Riley Stearn’s one-of-a-kind comedy starring Jesse Eisenberg. A darkly comic and sometimes shocking takedown of toxic masculinity and cultural appropriation.
- ‘Greener Grass’ – An absurdist Masterpiece and contender for weirdest film of the year from Directors Jocelyn DeBoer & Dawn Luebbe.
- ‘Knives and Skin’ - Director Jennifer Reeder’s hyper-stylised subversive teen flick re-invention.
- Documentaries – A selection of the year’s most remarkable documentaries, including ‘Friedkin Uncut’, ‘Marcel Duchamp: Art of the Possible’, ‘Fuck You All: The Uwe Boll Story’ and Alexandre O Philippe’s must-see ‘Memory: The Origins of Alien’, in celebration of the 30th anniversary of Ridley Scott’s Alien.

The much-loved SUFF short film sessions are back, offering audiences the chance to sample on some of the weirdest in short film delectable delights, along with conferences and workshops for the budding (and not so budding) filmmaker. 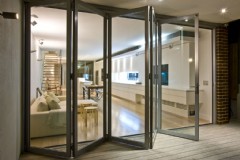