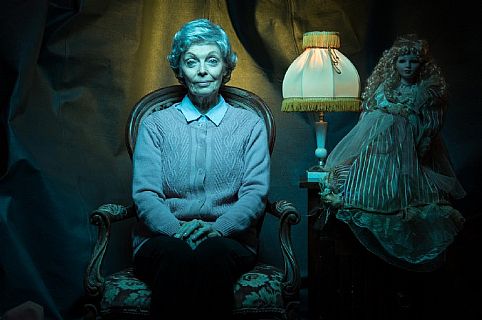 Late at night, a troubled young couple - Elias and Jenny - check into an old bed and breakfast in Gettysburg, Pennsylvania run by a mysterious host, Mertis. They want to see the sights and try to salvage their relationship.

The house has a bloody civil war past. It’s filled with figurines and tchotchkes. And dolls. Many, many dolls… Here, affable Mertis tells ghost stories, offers fudge and records the sunsets. Meanwhile, Elias and Jenny bicker painfully, and Mertis’s elderly friend, Genevieve, describes being haunted by the spirit of her ex-husband.

Hundreds of eyes watch on. Childhood trauma, Latin incantations, lists of birds, Lovecraftian monsters, a watchful universe, mistrust, infidelity, and one very angry American Girl Doll are just a few of the troubles that disturb the air over one fraught post-Thanksgiving weekend.

Mysteries abound as Annie Baker explores how alone we really are in the universe with her unique blend of wit, empathy and deep insight.

Sydney Theatre Award nominated Craig Baldwin directs this production. He is accompanied by a brilliant cast of young and veteran talent: Shuang Hu (The Family Law), James Bell (Outhouse Theatre Co’s The Aliens), Belinda Giblin (Griffin Theatre Company’s The Turquoise Elephant, The Old Fitz’s Blonde Poison) and Maggie Blinco (STC’s Summer of the Aliens, KXT’s Omar and Dawn) will take us on a rich, uncanny journey into the human psyche.