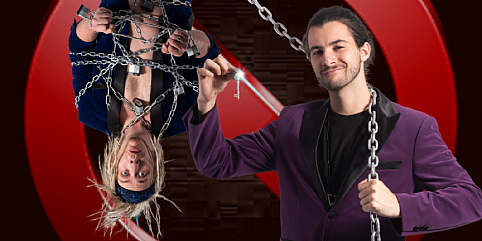 When:
Every day until Sat 14 Sep 2019
Cost:
Adults $35; Concession $30
Details:
Get ready to take magic to a whole new level in this spicy new ADULTS ONLY MAGIC SHOW which is set to debut at this year’s SYDNEY FRINGE with 3 shows only from 12 to 14 September at Forum Theatre, Leichhardt.

Following the success of The Greatest Magic Show for children, The Showmen now present a strictly ADULTS ONLY Magic Show which has played to sold-out shows at festivals all around the country. In this Adults Only Show the Showmen will deliver laughs, drama, danger, neverbefore-seen tricks, raucous routines and mind-bending illusions in a jampacked 60-minute spectacular.

The Showmen are seasoned magic performers Sam Hume and Justin Williams who met in 2014 and made a name for themselves with their unique blend of magic, comedy and theatre. They have been compared to Vegas’ most iconic magicians, Penn & Teller.