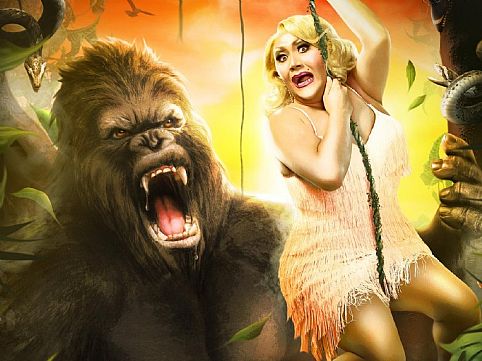 When:
Every day until Sun 01 Dec 2019
Cost:
See website
Details:
Somewhere off the coast of Australia, through the misty waters near Maroochydore, lies an island. A mysterious atoll where it is said beasts of unimaginable terror roam. Legend has it that these monsters have been created - genetically engineered, if you will - by a genius. Well maybe not a genius, but certainly a force of nature.

Yes, Queensland has opened its own version of Jurassic Park, and you’re the first guests.

Parodying everything from The Lion King to CATS, Australian politics to disaster flicks (one and the same really), Home and Away to Wentworth, this riotous musical comedy brings together the multi-award losing team who brought you Fat Swan, Little Orphan TrAshley and the smash hit The Bodybag.

In his new adults-only extravaganza, Trevor Ashley stars as Gaye Wray (from Home and Away), an actress desperately trying to shake her soap star status. Sound familiar?

When eccentric billionaire Dr. Richard Rabbitborough (Phil Scott) invites Gaye to return home from Los Angeles to star in the commercial for his new theme park, she can’t resist the opportunity (or the money). But when a huge electrical storm hits the island, things quickly go downhill, not only for Gaye, but for newly escaped attraction King Schlong who threatens to ravage everything and everyone on the island.

Joining Ashley for the first time is Phil Scott (The Wharf Revue), plus American Psycho stand out Shannon Dooley, Eleanoa Rokobaro (Book of Mormon, Caroline or Change) and Brendan Irving (Rocky Horror Show). The extraordinary costumes are by Angie White (Heathers, Mack & Mabel) and choreography by Cameron Mitchell (Catch Me If You Can, Calamity Jane) with lighting design by Gavan Swift (Harry Potter, Heathers).

THE LYIN’ QUEEN brings you romance, comedy, politics, trash culture at its cheapest, and a send-up of every movie ever made on or near an island. Expect ridiculous puppets, song parodies, and more out of date politicians than a Liberal party fundraiser.