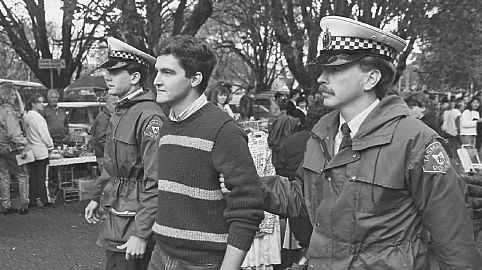 When:
Start:Tue 11 Feb 2020
End:Fri 28 Feb 2020
Cost:
$35 - $45
Details:
Seymour Centre presents The Campaign, an honest and raw retelling of the journey to repeal Australia’s most archaic anti-gay legislation, from 11th to 28th February as part of the 2020 Sydney Mardi Gras Festival.

In 1988, more than 100 arrests were made at Hobart’s popular Salamanca Market when the Tasmanian Gay Law Reform Group defied a ban to gather signatures on a petition to decriminalise sexual activity between consenting adult males in private.

The unprecedented and highly publicised arrests grew into Australia’s largest-ever gay rights civil disobedience, which began a campaign to change the Tasmanian law – the most draconian in the Western world in terms of its penalty and, by the time of its repeal, the last of its kind in Australia.

Based on personal testimony, parliamentary transcripts, media reports and archival sources from the people involved – including Rodney Croome, Nick Toonen and Christine Milne – The Campaign chronicles Tasmania’s journey from exclusion to inclusion, from opposition to acceptance, and from hatred to embrace.