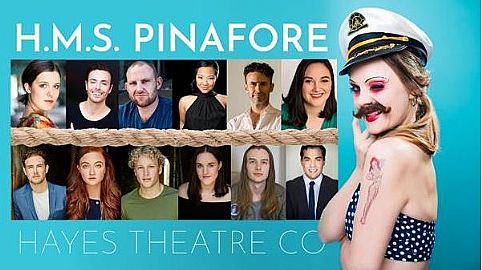 Overflowing with infectious tunes such as ‘I am the Monarch of the Sea’, ‘I’m Called Little Buttercup’ and ‘He is an Englishman’, this nautical caper is a sharp satire of the English social hierarchical system of the Victorian Age.

Pinafore's extraordinary popularity in Britain, America and elsewhere was followed by the similar success of a series of Gilbert and Sullivan works, including The Pirates of Penzance and The Mikado. Don’t miss out on this rollicking farce and get set for some hysterical hi-jinks on the high seas.

With some of the roles gender-swapped; the class battle treated more like a battle of the sexes; and the work’s insistence that love is love, Pinafore’s themes are timely.

Everything in the show is offered with a wink and a cheeky smile and Pinafore pokes good-natured fun at patriotism, party politics, and the rise of unqualified people to positions of authority. This is an accessible evening of music, comedy and drama for the open minded. Audiences can feel confident that Gilbert & Sullivan’s sparkling music and text remain intact.

This production of HMS is an operetta created with an onstage cast and orchestra of 12.