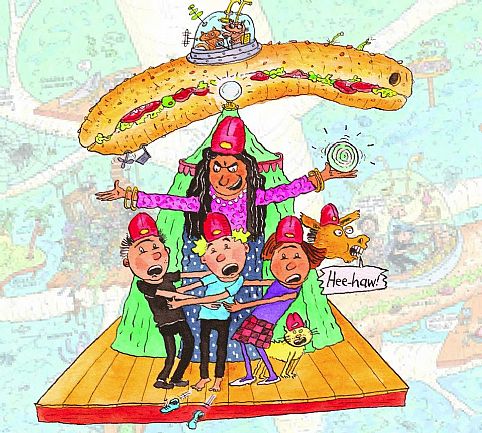 Andy and Terry are back to face their biggest challenge yet when the stage adaptation of THE 91-STOREY TREEHOUSE plays at GLEN STREET THEATRE from 26 – 29 February. Andy and Terry’s Treehouse has reached an amazing 91 Stories! It’s now more fantastically dangerous than ever, with a deserted desert island, a whirlpool, and a giant spider!

The team behind the hit adaptations of The 13-, 26-, 52- and 78-Storey Treehouses have come together once again to bring Andy Griffiths’ and Terry Denton’s bestseller The 91-Storey Treehouse to life on stage.

The best-selling, award-winning series of books by much-loved duo Andy Griffiths and Terry Denton has inspired children across Australia to let their imaginations run wild. The 91-Storey Treehouse has been short-listed for the Speech Pathology Awards 2018 and long-listed for ABIA Book of the Year for Younger Children 2018. The stage adaptations have also been incredibly successful throughout Australia, including The 52-Storey Treehouse winning the 2015 Sydney Theatre Award for Best Production for Children.

In this adaptation Andy and Terry are going to be challenged like never before! Mr Big Nose has sent his grandchildren to the Treehouse, and they don’t want to just sit quietly. Can Andy, Terry & Jill master this extreme babysitting challenge? What does mysterious fortune teller Madam Know-It-All really want? And will the Big Red Button really destroy the world?
Location:
Glen Street Theatre, Belrose
Contact:
Glen Street Theatre on
9975 1455