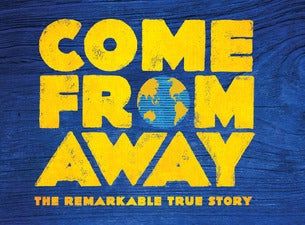 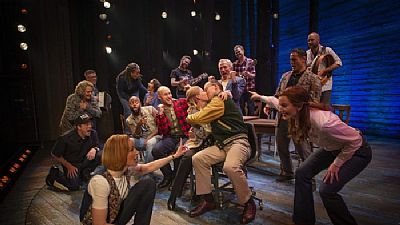 Click to enlarge
When:
Start:Thu 03 Jun 2021
End:Sun 27 Jun 2021
Cost:
Tickets from $85
Details:
The worldwide smash hit musical COME FROM AWAY has been rescheduled to play at the magnificent Capitol Theatre from 3 June 2021 and new seats are now on sale.

COME FROM AWAY has delighted audiences across the globe and finally Sydney theatre lovers will be able to discover this Tony and Olivier award-winning musical and its remarkable true story of a small town that welcomed the world.

Producer, Rodney Rigby said "At a time when our country and the world is facing unparalleled challenges, COME FROM AWAY is now more important than ever. It reminds us of our humanity through the extraordinary work of ordinary people. The good deeds and acts of kindness told in this uplifting and inspiring musical have brought people together across the world. We have been heartened by all the past Sydney ticketholders who have retained and transferred their tickets to our rescheduled season, and we are thrilled to now release a new round of seats to the general public".

COME FROM AWAY is the ground-breaking new musical based on the incredible real-life events in the wake of the September 11 tragedy when 38 planes carrying nearly 7,000 people from over 100 countries were redirected to Gander, Newfoundland, almost doubling the population of the remote Canadian town. Capturing the generosity and hospitality of the small community of Gander who invited the "come from aways" into their homes, it is a timely and inspirational story of hope and humanity.

COME FROM AWAY premiered its Australian tour in Melbourne in July 2019. A wildly successful nine- month season ensued, garnering stellar reviews and attracting spontaneous standing ovations at every performance. It broke the box office record at the Comedy Theatre and remains the most successful musical in the Comedy Theatre's 92-year history. It also won the Ticketmaster 2019 national "Ticket of the Year" award and the Drama Victoria award for Best Performance by a Theatre Company.

In April, the musical added to its Australian award tally with an astounding five 2020 Green Room Awards. COME FROM AWAY was awarded the prestigious prize of Best Production, as well as Best Ensemble, with Christopher Ashley winning for Best Direction. Gareth Owen was awarded Best Sound Design and Luke Hunter was the recipient of Best Body of Work in Musical Direction (for Come From Away and Jersey Boys).

Experience Sydney Australia Advertise your business here
Announcement
Dinosaur Valley is returning this summerCatch a T-rex in action, see a migrating triceratops family feeding in the valley - everyone will have a roaring timeView Scenic World »