Ibby Akbar “I Am” Australian Tour 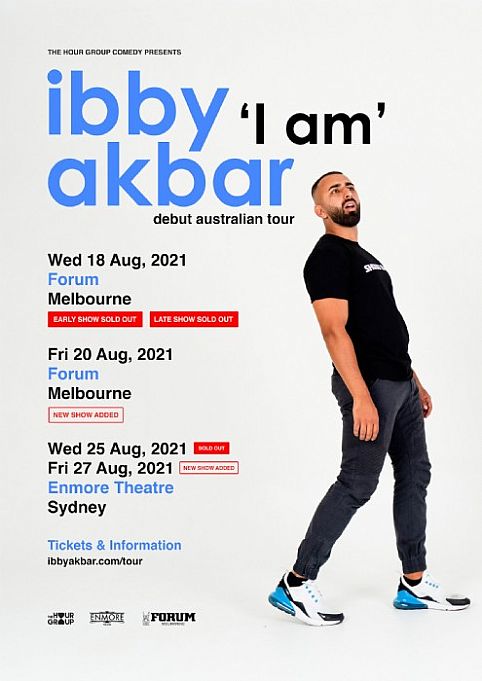 When:
Wed 18 Aug 2021
Details:
Australian Character Comedian and Social Media Sensation Ibby (aka Ibrahim Akbar) is set to kick off his Debut Comedy stage Tour ‘I Am’ in Melbourne & Sydney this August. With what began as a bit of fun on Facebook to entertain his family and friends, has since become a cult following with over 200K followers across his social media networks. The hilarity that ensues from stories of growing up in an ethnic family, to relationships, to poking fun at society in general, Ibby has definitely found his niche. He regularly posts video clip content and continues to entertain his fans, reaching bigger audiences by the day. It was only a matter of time before he would take the show ‘on the road.’

Fresh from finishing school, Ibby was waiting for his ATAR score to be released. Thanks to his parents’ ideals, he believed that this would essentially dictate the rest of his life. He came to a sudden realisation that this ATAR was more important to his parents than it was to him. This got Ibby thinking that ethnic parents seem to value academic scores highly and placed un-necessary stress on their children. He compared this ideal to having Aussie parents with a more laidback attitude, who didn’t really view this as a life-or-death situation. This very dichotomy spurred on the creation of his very first 15 second video on Facebook. This was also purely for family and friends to have a laugh over. What came next was surprising and somewhat a revelation, that Ibby’s sense of humour and views on life, were also shared by many, outside of his close circle.

Ibby started to create more and frequent content videos. He started comparing different types of Aussies from different backgrounds ie Aussies from ethnic families. He then went on to discuss common themes and issues that young people related to, ranging from how girlfriends, boyfriends, parents and even grandparents all communicate. Ibby’s videos grew in popularity and over a year, he had amassed a following of 20,000 people on his personal Facebook account. He then realised that he had developed a strong brand and decided to create a Facebook Fan page and over time, started to devote more time to his other social media platforms – now sitting at 114,000 followers on Instagram, 78,000 followers on Facebook and 45,000 on TikTok. Ibby’s videos have evolved ranging from skits, to rants about everyday topics.

With Ibby’s forthcoming debut comedy show, fans can expect to get an inside look into his world and him as a person. What makes Ibby happy, sad, angry, talking about his childhood (his parents migrated to Australia from Afghanistan but Ibby was born and raised in Melbourne), life and more. He will also talk about his observations of the current state of society and people in general, from the Moey DW’s (Character Comedian) of the world, to the different relationship dynamics - 2021 style. In a no holds barred style show, nothing is off limits. For those who enjoy his social media clips, get ready for Ibby’s 1 hour stand-up comedy show, where he believes he’ll have you laughing from start to end!

Share Ibby Akbar “I Am” Australian Tour with friends.