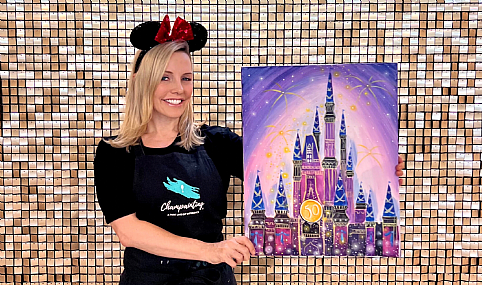 When:
Selected Dates until Mon 22 May 2023
Cost:
$60.00
Details:
The magic has arrived in Sydney as Champainting® celebrates “The World’s Most Magical Celebration”! In honour of the Walt Disney World Resort’s 50th Anniversary, Champainting® has launched a brand new magical paint and sip experience.

Discover the magic of this 18-month long celebration as you create your custom Cinderella Castle masterpiece guided by Champainting’s talented artists. The new Cinderella Castle artwork will capture the essence of ‘Disney Enchantment’, the stunning new nighttime fireworks spectacular at Magic Kingdom® Park, bringing a bit of Disney down under.

Channel your inner artist and unleash your Disney obsession with this magical art class at one of Champainting’s chic BYO art studios.Champainting® will supply all the glassware and tapas plates as well as a fridge and ice to keep your drinks cold. So grab your grazing platter and vino, and enjoy some Disney magic with this new series of art classes. Whether it’s a first date or a night out with the girls, Champainting® will bring nostalgia to life with these new Disney sessions.

Share Champainting to bring the magic of Disney to their studios in celebration of Walt Disney World Resort’s 50th Anniversary with friends.