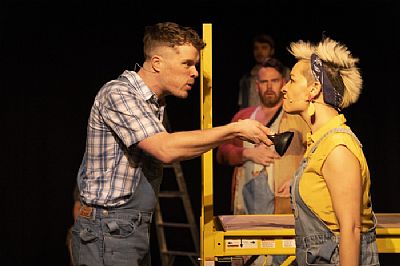 The talented cast includes mother and daughter duo Karen Vickery (Company) and Natasha Vickery (Assassins) in the roles of Officer Lockstock and Little Sally. Playing Penelope Pennywise and her assistant Bobby Strong are Deanna Farnell (RENT!) and Joel Horward (Hitler’s Daughter). Max Gamble (Shrek The Musical) plays businessman Caldwell B. Cladwell and Petronella van Tienan (Nine) plays his beautiful daughter, Hope. Doubling up on the roles of Senator Fipp and Ma Strong is Joe Dinn (Priscilla Queen of the Desert). The remaining cast members will be announced at a later date.

In a Gotham-like city, a terrible water shortage, caused by a 20-year drought, has led to a government enforced ban on private toilets. The citizens must use public amenities, regulated by a single malevolent company that profits by charging admission for one of humanity’s most basic needs. Amid the people, a hero decides that he’s had enough and plans a revolution to lead them all to freedom!

The creative team comprises of Director and Producer Ylaria Rogers (Big Fish, Follies) with music direction by Matthew Reid (Oz Panto) and choreography by Hayes favourite Cameron Mitchell (Nice Work If You Can Get It, Catch Me If You Can).