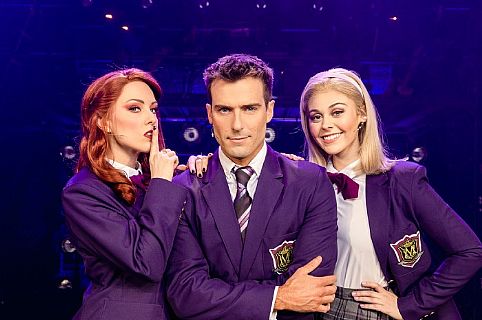 When:
Thu 02 Feb 2023
Cost:
$99
Details:
Riverside Theatres and David Venn Enterprises presents Cruel Intentions: The ‘90s Musical, back by incredible demand after a successful premiere season in 2022, at the Riverside Theatre from the 2nd to 12th February.

Based on the Hollywood film, featuring back-to-back ‘90s songs from The Verve, *NSYNC, Christina Aguilera, Britney Spears, No Doubt, Jewel, Placebo and many more, this bittersweet symphony will have audiences singing and dancing in the aisles.

Drawing audiences deep into the manipulative world of Manhattan’s most tempting liaisons: Sebastian and Kathryn are seduced by revenge and fuelled by passion. Set out to ravage the virtuous Annette Hargrove and anyone who gets in their way, the siblings find themselves entangled in a web of secrets, temptation, and the cruellest game of all: love.

Featuring stellar performances from Kirby Burgess (The Wedding Singer, Bring It On The Musical), Drew Weston (Grease, Ghost), and Kelsey Halge (Cruel Intentions 2022 season) alongside an incredible ensemble, with direction by Alister Smith (Bring It On The Musical), this upbeat show will transport audiences into the ‘90s dream quicker than the speed of dial up internet.
Location:
Riverside Theatre, Riverside Theatres - Corner of Church and Market St, Parramatta
Contact:
Riverside Theatres on
(02) 8839 3399
Send an Email »